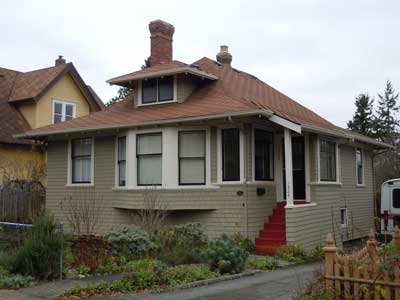 ARCHITECTURE:
This small Arts & Crafts Bungalow is very similar to a number of others by D.H. Bale, including 911 Collinson St, Fairfield. This example is largely intact. It has a wide bellcast hipped roof with a bellcast dormer on the front, exposed rafter-tails and two corbelled chimneys. The front façade features a wide, cantilevered angled bay beside a small recessed porch on the right. The front door has a leaded-glass panel and faces the street. The windows in the porch, on the right side and in the dormer, are three-over-one. On the left side, there is a leaded piano-window, and a leaded, multi-paned, cantilevered box bay. All the other windows are one-over-one sashes with horns. An early barrel-roofed garage survives at the right rear.

1910-18: Alice Amelia Boorman (b. London, ENG, c.1871-1918) lived here with her widowed mother, Frances Jane (née Robson, 1844-1924) until Alice’s sudden death following an operation. Alice was a needlework specialist and taught the subject at local schools. Alice and Frances lived at 1328 Balmoral from 1905-10. The Boorman family came to Canada from London, England, in 1894. Frances’s husband William Scoones Boorman (c.1843-1909) was a clerk at the Driard Hotel until his death. In 1905 he had David Herbert Bale build two houses east of this house, 1328 and 1340 Balmoral. The family had a tennis court between the two, where 1334 Balmoral now stands. Their son Albert Sidney Boorman (1876-1947), a cabinetmaker with J.A. Sayward and then box factory foreman with Canadian Puget Sound Lumber Co, lived at 1328 with his wife Frances “Fanny” (née Oliver, b. Oxford, ENG, b.1888), whom he married in 1910. Another son, Walter William Boorman, a bookkeeper with B. Williams & Co (528 St Charles St, Rockland), lived at 1340 with his wife Marian Emelda “Mamie” until his death from typhoid fever.

1924: Laurence and Marion “Grace” Woodward married in 1921 at the Church of Our Lord. [Note: Laurence was born in Victoria in 1893; his father Arthur Joseph Woodward in 1892 established A.J. Woodward & Sons, nursery and florists, with greenhouses on Fairfield Rd. Clovelly at 1196 Clovelly Tr in Saanich was the main family home from 1914-44.] Woodward’s florist shop was in the 600 block Fort St for much of the 20th Century, and Laurence was manager for many years.

1956-2002: This house was purchased by neighbours Barton Emmett “Bart” Alexander (b. Victoria, 1907-1981) and Frances “Bunny” (née Gosling, 1904-2002). Bunny’s widowed mother Helena Gosling (née Sholt, b. ENG, 1882) in 1920 married druggist John Abington Teague (b. Victoria, 1870-1938), the son of Victoria architect and mayor John Teague. Bunny lived with them and was an elevator operator in the Pemberton Block for many years. In 1931 they took in a boarder, truck driver Bart Alexander, whom Bunny had met at a dance. In 1941 Helena, Bunny and Bart moved to 1328 Balmoral. Bunny and Bart were married in the late 1940s, and bought 1324 Balmoral in 1956. Bart drove coal delivery trucks for 50 years. He died from Emphysema.
[Note: Bart was the son of Thomas Alexander (b. Victoria, 1859-1926) and Corinthia (née Pierre, b. Victoria, 1868-1939), and grandson of Charles Alexander (1824-1913) and Nancy (née Carter, 1834-1912). Charles and Nancy were born free Blacks in St. Louis, MO, where Charles ran a gristmill. In the 1850s they travelled for four months with two small children, four friends and a guide in a covered wagon drawn by four bullocks across the continent to California. After searching unsuccessfully for gold, they came north on the Oregon from San Francisco in 1858, with some of the 700 free Black families who came on the invitation of Governor James Douglas (see Dandridge and Lester families, 1243 Rudlin St, Fernwood). The family lived for several years in a two-room log cabin on the site of the later Hudson’s Bay Co building, now the Hudson. Charles had some success at gold mining on the Fraser River, and they bought land in South Saanich in 1861. They were founding members of Shady Creek Methodist Church, and Charles built the first church building. Son Thomas, one of 12 children, married Corinthia in 1887. He established a successful cartage firm with his sons, (the youngest of whom was Bart). T. Alexander & Sons hauled coal for Kingham & Gillespie Coal Co for decades.]

Alexander Park in Fernwood between Bay St and Walnut St at Oregon Ave is named in honour of the family.