Old Craigflower School occupies an honoured niche in British Columbia history, and, as befitting its claim to being first and oldest, boasts a thick file in the provincial archives. Dozens of yellowing newspaper clippings recall its 100th birthday, it’s early teachers and students, that long-ago day when its sturdy doors were constantly barred against hostile Indians.

But there is one reference to the historic school not to be found in this file, instead being buried in the Ps under “Mister Palliser.

The intriguing Mister Palliser was Hugh Palliser, caretaker of the second Craigflower School, built across the street in 1911. He and his family came out from Yorkshire, England, that year, moving into the old schoolhouse on the sleepy banks of the then-unspoiled Gorge. In fact, it is the foresight of Hugh Palliser we have to thank for helping make Craigflower the fine museum it is today; he salvaged many of the original desks and furniture which had been thrown into the brush to rot. ” This is the story of Craigflower’s visit by a ghost.

Mister Palliser’s encounter with the unearthly visitor occurred sometime later, when neighbouring Craigflower Bridge collapsed, plunging a truck, and almost its driver, into the Gorge. Days later, salvage operations were begun. The plan was to secure an anchor in the adjacent schoolyard and winch the vehicle back to shore.

The drama began to unfold when a workman unlimbered his tools and started excavating the necessary hole in the school grounds. Minutes later, his arching shovel hesitated, then stopped in mid-swing. Frowning curiously, the contractor fell to his knees, sifting the loosened soil through his calloused fingers.

Several small bones, browned with the age except where they had been injured by his spade, littered the hole. He gave them another wondering glance, shrugged, and resumed working. Just a deer or dog, he thought.

He changed his mind seconds later, when his blade uncovered what were unmistakably human arm bones. Again kneeling, he ran his hands through the disturbed soil, his probing fingers closing on an object that was large and round. Even before he pulled the toothless skull free, he knew he had stumbled upon a long-forgotten grave.

“Some old Indian, I guess,” volunteered caretaker Palliser as he joined the search for remaining bones and teeth. Placing them in a box, he packed the grisly prize to his woodshed, a lean to build onto the kitchen. His youngest daughter was interested in that sort of thing and he would show her the bones when she returned from school. She would enjoy rebuilding the skeleton, he knew, and might learn something from it. Then he forgot the strange find as he continued his chores.

That evening, after the supper dishes had been cleared, the family gathered about the glowing stove as customary, Mister and Mrs. Palliser to read, the children to do their homework. The evening passed quietly, as usual, until the latch of the door to the lean to clicked loudly, attracting all eyes. Surprise, the family watched the door slowly swing wide, and a chill draft invaded the warm kitchen. But no one entered.

“Humph, must have left the outside door open,” mumbled Palliser, striding through the dark and shed when he returned, a puzzled frown creased his four head. “That’s strange,” he remarked to his wife, “the outer doors locked. Tight as a drum.”

He examined the kitchen door. Constructed of boards nailed edge-to-edge by three crossbars, its iron hinges and thumb latch seemed in order. When he pushed it shut, the latch snapped into place. 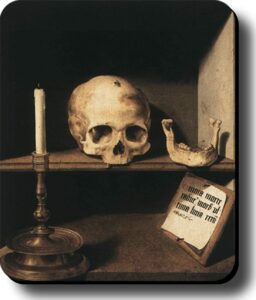 Then the incident was forgotten

This time he was ready. Snatching up a lantern, he charged into the woodshed, flashing the lamp into every shadow. Nothing. Again, he checked the outer door. Locked. Then the family resumed its routine. But not for long. It was as they made ready to retire that Palliser again heard the distinctive sound of the latch being raised. As he stared in amazement, the door again swung open, allowing a cold draft to penetrate the kitchen.

Near speechless with wonder, he slowly retreated to the kitchen, then paused to circle the leanto once more with the light.

He almost dropped the lantern when its glow fell on the skull. It lay in the box where he had placed it that afternoon, hideous, empty eyes staring at him, jawbone curled back in an evil toothless grin. The macabre effect lasted but a second.

This is silly, he smiled to himself, and went to bed. There were no further incidents that night, only nightmares disturbing his sleep.

“Now Mister Palliser’s family was used to the eeriness of the old schoolhouse,” explains the 30-year-old record.

“They knew which of the floorboards in the deserted school room groaned the loudest when it expanded and contracted in the dead of night. They had learned that when the wind blew from a certain direction there was a corner of the eaves which moaned like a hurt child, and that when there was a muffled scratching and shuffling, punctuated by long silences which would make a visitor’s hair tingle at the roots it was only the water rats come up from the bottom of the garden to investigate the larder.

“They knew all these things and they thought nothing of them, so that they were quite unprepared for the mysterious happenings that began that night.”

The next evening, Palliser bundled his family to bed early. Then, lantern within easy reach, he waited pensively by the stove. Waited for something he could not see or explain. But that something would come again, he was sure.

For hours he maintained his lonely vigil, taking his eyes from the door only to feed the fire. Then…. he heard it.

As he watched, the latch slowly lifted. Leaping to the door, he jerked it wide, to be met by that deathly cold wind. His lantern stabbed the dark, sweeping the shelves of preserves, tools, and the neatly stacked firewood. No one was there, nothing moved by the dancing shadows of his flickering lamp. He rattled the outside door. It was locked.

Then he saw it. That hideous, gloating skull. Its evil grin seemed almost alive.

Palliser knew what had to be done. Grabbing a shovel and the box of bones, he stumbled out into the night. 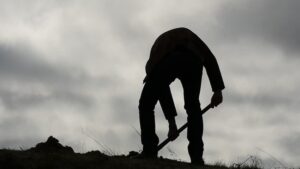 Somewhere beneath the ancient gnarled maples of the old schoolyard, he returned the accursed skeleton to the earth.

And that is a chilling tale of the time Craigflower School was haunted, albeit ever as briefly.

Where Palliser buried the skeleton he never told. But he did say his kitchen door never again rattled and opened to the invisible hand the ghostly visitor.