When the Oregon Boundary Dispute was settled in 1846 and the 49th parallel became the line of division between the United States and British North America it became abruptly apparent that  the farms of Fort Langley and the three dairy farms around Fort Victoria were insufficient to meet the needs of the people.

The Hudson’s Bay Company, who had a vested interest in Fort Victoria and environs, decided to expand the Puget Sound Agricultural Company to include the development of the four farms 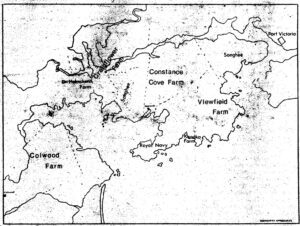 in the south Vancouver Island region.

In order to comply with the charter requirements that colonists be sent to the Company lands, bailiffs were appointed from the Old Country and sent with their families to establish farms.

Thus, the area could be safely colonized by people with a sense of loyalty to the company and not by independent settlers.

In 1849, the headquarters of the Puget Sound Agricultural Company was transferred to Victoria and placed under the capable command of James Douglas with instructions for him to set aside 10 square miles of land for the farms needed to supply the fort.

Instead of creating one huge farm, Douglas set aside four separate locations. As quickly as possible the farms were established. The first, in 1850, was Viewfield Farm. In 1851, Esquimalt or Colwood Farm was established and Craigflower and Constance Cove Farms followed in 1853.

To save time in getting the first farm producing, a local man, Donald Macaulay, was appointed bailiff. The area over which he ruled comprises much of present-day southeast Esquimalt. From West Bay, the boundary of the farm followed the shoreline of Victoria Harbour taking in Rose Bay, Maclauchlan Point, Macaulay Point, and Saxe Point to Kanaka Bay.

There it returned inland at the sea end of Admirals Road and travelled to the height of land on Old Esquimalt Road. The boundary then swung east, following the ridge to Dominion Road then due south to West Bay.

A long-time Company employee, Macaulay had served on the HBC brig Liama and later spent a period of service at Fort Simpson. Here he met and married a woman who was to bear him six children.

When Macaulay arrived at Fort Victoria he brought his wife and four daughters Mary, Flora, Catherine and Sarah. Two more girls, Margaret and Marianne would be born at Viewfield.

During the years that followed, Viewfield fulfilled the reason for its existence by producing pigs, sheep and cows and later cattle, all of which were destined to travel the long dusty trail from Viewfield to the Craigflower slaughterhouse (now Esquimalt and Admirals Road). Unfortunately, Viewfield was not the great success Macaulay had hoped for.

By the end of 1854 it had a small population of only 14 people, nine of whom were under the age of 15. A few Songhees labourers could also be included in this number but are not mentioned in the census taken by Douglas that year.

Only 35 of the 600 acres had been cleared and were producing. Only three dwellings graced the landscape. Sheep and their wooll had become the principal commodity with the cows and pigs taking a low second place.

One by one Macaulay’s daughters married and left the farm. The first to go was Mary who married William McNeil in 1853 and departed for a comfortable home on a 200-acre parcel on McNeil or Shoal Bay. In 1855 Flora married James Todd, the son of John Tod, chief trader for the Bay Company and later Member of Parliament for Vancouver Island.

Viewfield existed for only 10 years… from 1852 1860. In later years, the farm was subdivided and Macaulay was sent back to Fort Simpson for the next three years. Part of the farm became a cattle ranch for longhorns who grazed while behind a snake fence until their time came for an appointment at Parker’s slaughterhouse at Craigflower.

Macaulay returned to Victoria in 1863 with the responsibility of the Bay Company’s powder magazine at Esquimalt. In the meantime a third daughter, Catherine had married Pym Compton in Fort Simpson and later moved with him to Fort Rupert. Macaulay stayed in Esquimalt until 1868 when he was accidentally drowned in Esquimalt Harbor.

Nothing remains of Viewfield Farm. The buildings have disappeared without a trace. The moss-covered snake fence is gone. Only a single Street on the old border between Viewfield and Constance Cove Farm bears the name of the farm and stands as a reminder of what has been.

Adjoining Viewfield on its western boundary was a small farm known as Kanaka. A run-down ranch house was home for a small community of Sandwich Islanders (Hawaiians) who had been brought to the colony as cheap labour.

At first the Islanders had settled in a part of Victoria known as Kanaka Row (now Humboldt Street) but as the white population increased and pressures became greater on these people they elected to move out of town.

They selected a picturesque bay west of Saxe Point for their home. Here, at the foot of Constance Street, their decrepit house and untidy gardens were attended. Unable to become totally self-sufficient, the Kanaka’s hired themselves out as cheap labour to Viewfield, Constance Cove and the other farms. Absolutely nothing remains of the Kanaka Farm except the name which has been preserved in Kanaka Bay.

Capt. Edward Edwards Langford was appointed by the Hudson’s Bay Company to the position of bailiff for its second farm near Fort Victoria. Unlike Macaulay, Langford was a man experienced at landholding. A retired officer of the 73rd Regiment, he owned an estate of 200 acres in Sussex, England.

Taking the HBC’s annual supply ship, the barque Tory, from England, Langford and his wife, Flora, and their son and five daughters arrived at Fort Victoria on May 14, 1851, after a long voyage around the tip of South America. From the moment he stepped ashore friction developed between Langford and the officers of the Bay Company.

He was shocked to find that no adequate accommodations had been made available. Only “a couple of log cabins or rather sheds” was prepared for the arrivals who numbered about 140 people. In these “they huddled together like cattle… To the number of 30 or 35 to each shed, men and women, married or single without any kind of screen to partition between them.”

Langford spared few harsh words in making his indignant wrath known. The Rev. and Mrs. Staines stepped in at this point and offered to share their home with the Langford family and when it became known that Flora Langford would soon give birth, Gov. Blanchard (a distant cousin) offered his home for the duration of her confinement.

Now that tempers had cooled and Langford became more cordial he was invited to see his new home on the opposite side of Esquimalt Harbor. Langford was pleased to know that a gristmill and sawmill had already been established on Millstream, the northern boundary of the farm. The gristmill had been in operation since 1848, built by Roderick Finlayson and operated by a Mr. Fenton. In 1850 he was replaced by Mr. Parson who later opened Parson’s Bridge Hotel to cater to the needs of the sailors across the harbour. (The Hotel is now the 6 Mile House.)

The captain wasted little time in establishing himself. Soon after his arrival the farmhands who had accompanied him up from England, assisted by Indians and Kanaka’s from the Sandwich Islands, began to clear the land.

The Esquimalt Farm (or Colwood Farm as it was known locally) was some 600 acres in size. It consisted of a roughly triangular shape piece of real estate beginning with a water frontage from the mouth of Millstream to Paterson Point. From there it swung in land to run in a south westerly direction to Colwood Lake. From the far end of Colwood Lake the border ran north to Millstream which is then followed towards Esquimalt Harbor as far as the site of the mills. It had been decided that the mills would be on neutral ground and still available to all farms.

By 1850 for a prosperous farm had been developed. 12 buildings dotted the landscape populated by 30 people of whom only six were under the age of 10. 190 acres had been wrested from the virgin forest and sported crops of wheat, peas and oats. Other acreage fodder to horses, cows, oxen, pigs, poultry and in excess of 500 sheep.

The Manor House, name Colwood, after Langford’s old home in Sussex, was located at the far end of the farm just south of the present-day entrance to the Royal Colwood Golf Club.

Due to the presence of five lovely daughters at Colwood, the house soon became the centre of a carefree social life, much of which Langford paid for out of Company coffers. This extravagance had its toll on the prosperity of Colwood Farm. Parties, dances and picnics entertain the local gentry and Royal Navy officers.

In 1853 Langford tapped the company for a sum in excess of eight times his annual salary to pay for these entertainments. The Company hierarchy promptly reprimanded him and hinted at his dismissal. Somewhat chastened, Langford tone down his expenses.

A small school was constructed near Colwood House when Langford sister arrived from England. Called the Academy for Young Ladies it boasted such pupils as Alice and Agnes Douglas, daughters of James Douglas.

In 1854 Langford was appointed Justice of the Peace for his area and two years later was elected to the Legislative Council of the Colony of Vancouver Island. When he was disqualified from the position due to the fact that he owned no land he promptly became self-appointed leader of the opposition and deluged the office of the Secretary of State for the Colonies with indictments against the Bay Company and the Government.

The first of the Langford daughters, Louisa Ellen, was married to Capt. Jostling in England in 1857. Another daughter, Emma, married Capt. Bull of HMS Plumper in 1860 at Colwood. The marriage was of brief duration as the good captain died suddenly 10 months later at the tender age of 27.

Of the other girls, Sofia, Florence and Mary, the latter was still unmarried when the family returned to England. She remained true to her first love, a junior officer on Tory who she had met on the voyage over. They met again 20 years later and Capt. George Lewis married her and later returned to Victoria with her.

On January 12, 1861, Langford and his remaining family returned to England. Nothing remains of the farm. For many years, the neglected masonry walls of an old dairy stood as mute evidence to the passing of the Langford’s. Colwood itself stood neglected for many years until finally being torn down.

Editor’s Note: This historic dairy building still exists and is a designated heritage building in Colwood and scheduled for restoration (2021)